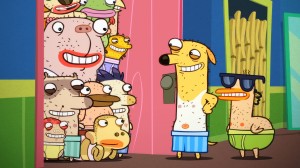 Toronto, Canada – January 14, 2013 – 9 Story Entertainment and Scholastic announce the signing of a publishing deal for the hit animated children’s comedy series Almost Naked Animals. The deal was brokered by The Licensing Shop.  Scholastic will publish comic readers, joke books, chapter books, e-books and digital interactive story books featuring the quirky characters and their funny escapades for the US, Canada and Mexico in English and Spanish.   The English chapter book and joke book will launch January 2013 in the US and Canada.
Chosen as one of People Magazine’s top children’s shows to watch, Almost Naked Animals is a joyously irreverent animated comedy series, featuring an oddly lovable assortment of free-spirited animals in their underwear, who run a beach-front hotel like kids at a summer camp – doing their best to make each day more fun than the last. The series is based on the quirky designs of Noah Z. Jones.
“We are thrilled to welcome these ‘almost naked animals’ to our list.  9 Story has created a brand that is chock full of humor, fun and friendship.  It’s fantastic storytelling and sure to resonate with kids across multiple mediums,” said Gayley Avery, Director of Licensed Publishing, Scholastic Trade.
“Scholastic is a respected leader in publishing and distributing children’s books and we couldn’t be happier to be working with them to bring the adventures of these wonderfully colourful characters to young readers throughout North America,” said Vince Commisso, President and CEO 9 Story Entertainment.
Almost Naked Animals is seen in the U.S. on Cartoon Network and in Canada on YTV and VRAK, in addition to airing on leading international children’s channels around the world.  Almost Naked Animals’ robust licensing program includes home entertainment, toys and apparel, an online super game, an e-commerce store in addition to social networking partnerships.
Scholastic Corporation (NASDAQ: SCHL) is the world’s largest publisher and distributor of children’s books and a leader in educational technology and related services and children’s media. Scholastic creates quality books and ebooks, print and technology-based learning materials and programs, magazines, multi-media and other products that help children learn both at school and at home.  The Company distributes its products and services worldwide through a variety of channels, including school-based book clubs and book fairs, retail stores, schools, libraries, on-air, and online at www.scholastic.com.
9 Story Entertainment is one of the industry’s leading creators, producers and distributors of award-winning animated and live-action content for young audiences around the world.  With one of North America’s largest animation studios based in Toronto, 9 Story has over 200 creative and production staff, and has produced over 600 half hours of quality children’s and family programming, seen on some of the most respected children’s channels around the world across multiple platforms.  The company’s distribution arm 9 Story Enterprises represents a growing catalogue which includes several beloved brands such as Wibbly Pig, Harriet the Spy: Blog Wars and Wild Kratts in addition to popular new series such as Almost Naked Animals, Survive This and Daniel Tiger’s Neighbourhood. www.9story.com