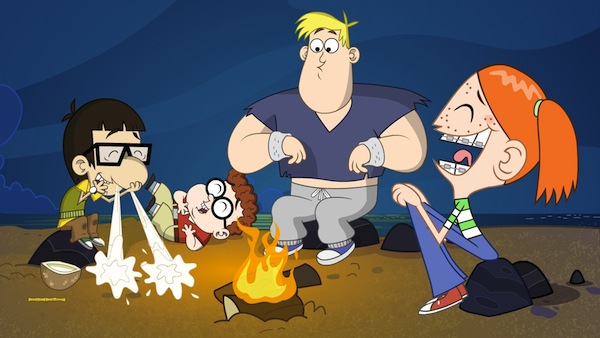 Toronto, Canada – January 28, 2013 – 9 Story Entertainment announces its international distribution division 9 Story Enterprises is expanding to include acquired programming in its catalogue, beginning with the international distribution rights to Slap Happy Cartoon’s new animated series Nerds and Monsters (40×11′).  The series was recently greenlit by Corus Entertainment’s kids and family network YTV in Canada for a January 2014 premiere.   9 Story Enterprises, led by Natalie Osborne, Executive Vice President Business Development, has become one of the industry’s leading distributors of children’s and family programming.

“This is a natural next step as we grow to becoming one of the industry’s largest distributors of children’s and family content,” said Vince Commisso, President and CEO, 9 Story Entertainment.

“We will be strategically acquiring content with both the production quality and entertainment value to fit the 9 Story brand and are delighted that Slap Happy’s Nerds and Monsters is our first acquisition,”  said Natalie Osborne.

Nerds and Monsters is a comedy aimed at 6-11 year olds that tosses a group of nerdy kids on a fantastic uncharted island. The tween castaways must use nothing but their smarts to survive the relentless attacks by the island’s inhabitants – a tribe of hideous Monsters that are mistakenly threatened by their human invaders. Lucky for the nerds, these dim-witted monsters don’t have any smarts!

“We’re excited to be teaming up with 9 Story,” said Greg Sullivan, Partner at Slap Happy Cartoons. “Their enthusiasm for the property and fantastic track record in distribution make it an ideal partnership, and we can’t wait for them to unleash these Nerds and Monsters into the global kids’ TV Market.”

9 Story Entertainment is one of the industry’s leading creators, producers and distributors of award-winning animated and live-action content for young audiences around the world.  With one of North America’s largest animation studios based in Toronto, 9 Story has over 200 creative and production staff, and has produced over 800 half hours of quality children’s and family programming, seen on some of the most respected children’s channels around the world across multiple platforms.  The company’s distribution arm 9 Story Enterprises represents a growing catalogue which includes several beloved brands such as Arthur, Wibbly Pig, Harriet the Spy: Blog Wars and Wild Kratts in addition to popular new series such as Almost Naked Animals, Camp Lakebottom, Cache Craze and Daniel Tiger’s Neighbourhood. www.9story.com