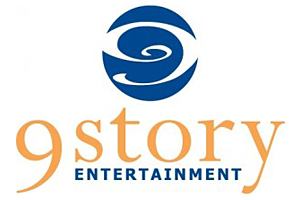 *New Nerds and Monsters (40 x 11′) A new animated comedy aimed at 6-11 year olds that tosses a group of nerdy kids on a fantastic uncharted island with a tribe of hideous but dim-witted monsters that think the nerds are invaders!

*New  Peg + Cat (80 x 11′) A new preschool animated series that follows an adorable spirited little girl, Peg, and her sidekick Cat, as they embark on adventures while learning the magic of numbers.

*New Cache Craze (10 x 60′) A new geo-caching competition series that is part treasure hunt, part adventure challenge. With a GPS and digital treasure map, contestants navigate their way across an array of comedic challenges while they try to find each hidden cache and stay in the game.

Camp Lakebottom (26×22′ or 52×11′) The animated children’s series where 12-year-old McGee’s bus takes a wrong turn and he ends up spending his summer at the most and awesome camp ever, Camp Lakebottom!

Daniel Tiger’s Neighbourhood (40×22 or 80×11′) The charming animated preschool series featuring Daniel, a shy but brave 4-year-old tiger, who lives in the beloved Neighbourhood of Make Believe.

Arthur (20×22′ or 40×11′) The digitally enhanced 16th season of the hit children’s animated series, where everyone’s favorite 8-year-old aardvark and his gang of pals are back for 20 new episodes.

9 Story Entertainment is one of the industry’s leading creators, producers and distributors of award-winning animated and live-action content for young audiences around the world.  With one of North America’s largest animation studios based in Toronto, 9 Story has over 200 creative and production staff, and has produced over 800 half hours of quality children’s and family programming, seen on some of the most respected children’s channels around the world across multiple platforms.  The company’s distribution arm 9 Story Enterprises represents a growing catalogue of in-house and acquired content which includes several beloved brands such as Arthur, Wibbly Pig, Harriet the Spy: Blog Wars, Wild Kratts and Almost Naked Animals in addition to popular new series such as Camp Lakebottom, Cache Craze, Daniel Tiger’s Neighbourhood and Nerds and Monsters. www.9story.com