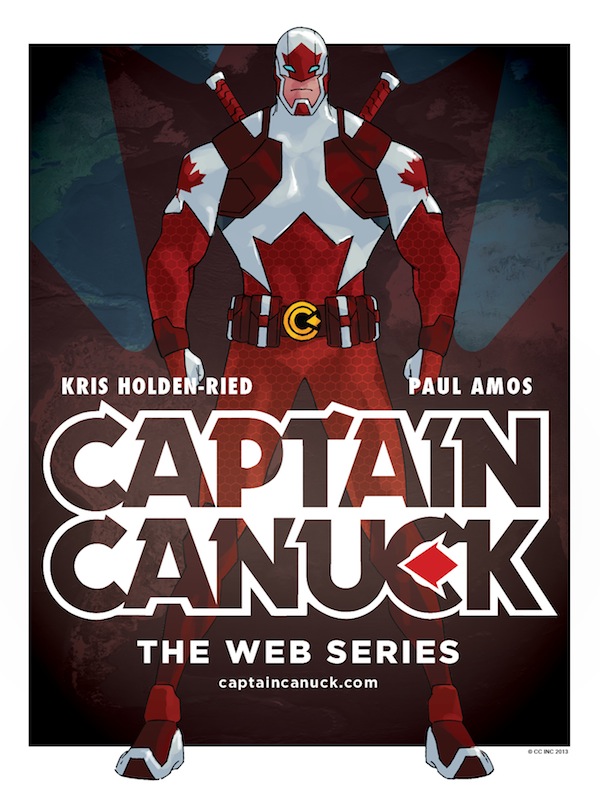 A Canadian Icon leaps off the Comic Book page and into Animation!

Toronto, Canada – March 8, 2013 – As superheroes dominate the big screen, Canada’s own iconic champion, Captain Canuck, created in 1976 by Richard Comely, has been reinvented for 2013 and is stepping into the limelight in an exciting new 5-episode animated web series.

Comely feels strongly about his character’s place in Canadian culture. “This is an important project and fans are letting us know. Captain Canuck is part of our collective identity, with roots in a period when our country was taking its place on the international stage. We imagined a future where Canada was an enlightened superpower, and Canuck was an extension of that.”

The project has been in development by Captain Canuck INC and their animation partner, Smiley Guy Studios. A sneak peek was released at Fan Expo last August, where new character designs were unveiled, directing fans to the updated captaincanuck.com website.

Voicing the Captain is Kris Holden-Reid (Lost Girl, Underworld: Awakening, The Tudors). “It’s a privilege and a joy to be playing Captain Canuck!” says Kris. “As a comic book lover myself, I’m thrilled to be part of re-creating a Canadian super-hero and bringing him to life on the screen.” Joining him as Canuck’s arch-nemesis, Mr. Gold, is Paul Amos (Lost Girl, Murdoch Mysteries, Warehouse 13).

Toronto-based comic book artist, Kalman Andrasofsky (NYX: No Way Home, X-Treme X-Men, X-23) worked closely with Captain Canuck INC in reshaping the look of Canada’s hero. “This is a ground-up revamp,” says Kalman. “We’re trying to take all the best elements of the classic and also layer in new elements that speak to the way hero mythology has evolved since Canuck was created in 1975”.

Also on the project is animation director Sam Chou (Style5.tv). “Sam was the first call I made when I saw Kalman’s work,” says Mike Valiquette, Director of Development at Smiley Guy Studios. “You only get one shot to do a project like this right. That comes down to having the right team. Sam is the only guy I can imagine doing this and we’re extremely lucky to have him.”

With fan interest growing, Captain Canuck INC and Smiley Guy are launching an Indiegogo campaign for the web series at an exclusive event on March 28th. “Crowd- funding sites like Indiegogo allow you to reach out to your audience at an early stage,” says Fadi Hakim, President of Captain Canuck INC. “we are reaching out to Captain Canuck’s loyal fan-base and getting them involved from day one. Fans old and new can get themselves drawn into the series as animated characters, and a choice few will even be able to face off against the Captain in battle.”

About Smiley Guy Studios: Smiley Guy Studios (SGS) is an award-winning, full-service production company with expertise in animation, design, writing, sound, music, and interactive media. Founded in 1998 by graduates of Norman Jewison’s Canadian
Film Centre, SGS has grown in size and capability, with expertise in vector-based animation, computer-generated imagery and multi-platform production. It produces its own original content while also collaborating with clients on a variety of animated TV, film and new media projects. www.smileyguy.com