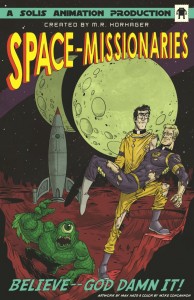 Space Missionaries is an animated series mini-pilot created at Solis Animation Inc., a Toronto based animation house. Solis has a record of working on largely edgy, adult fare, including Wondershowzen, Motorcity, SNL, and Ugly Americans. This project was basically a way to play off that momentum, but with their own IP.

Lou Solis told us, “Led by M.R.Horhager, our small, but dedicated crew put together a short trailer to give a clear feeling of the look and tone. So far, we’ve gone the traditional route by showing it around to a few broadcasters but the unconventional adult-religious-science-parody genre is a tough sell. Now the plan is to find an audience online and garner some support.  Fingers crossed, we’ll get the opportunity to see Space Missionaries become a reality.”

The project was designed and animated in Flash, backgrounds were painted in Photoshop, and effects and compositing were done in After Effects
There are also a couple of smaller promos and a mini game available (if you’re a SciFi fan, you might get a kick out of the homages)

Here’s a link to the mini game:
http://www.spacemissionaries.com/gamedemo/