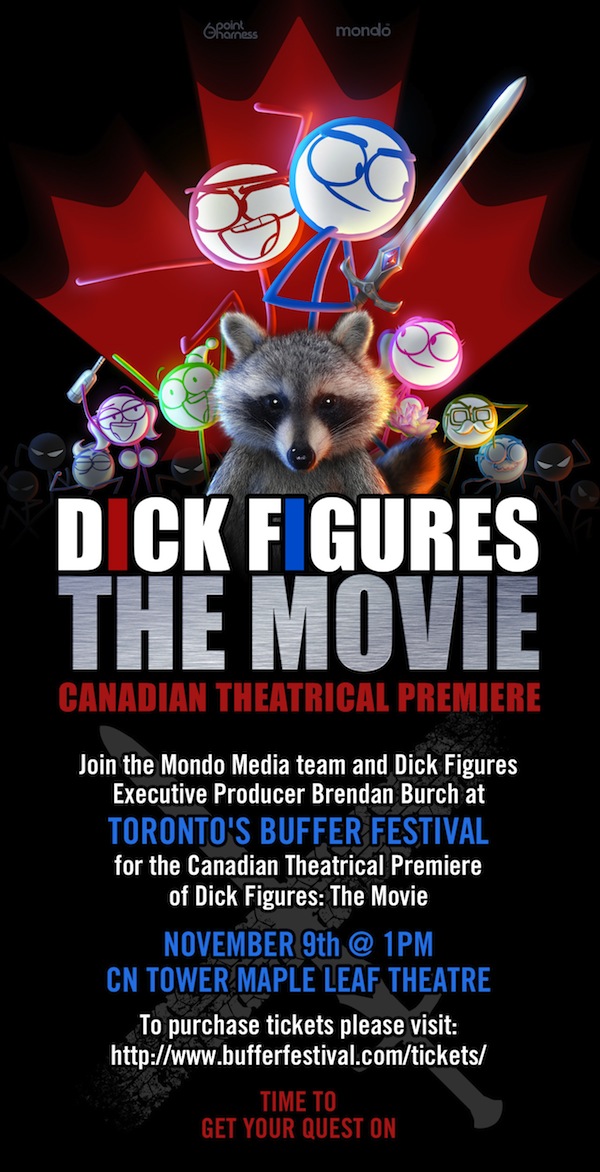 There’s some word going around about a not-so-surprise announcement following the upcoming theatrical screening of the Dick Figures movie on November 9th in Toronto. Here’s the info they’re teasing, I’ll let you fill in the blanks:

Mondo Media, Six Point Harness and Blue Ant Media are giddier than a couple of stick figured school girls to invite the creative community to join them for the Canadian theatrical premiere of, “Dick Figures The Movie”. The premiere will take place at Toronto’s Buffer Festival on November 9th at 1PM in Toronto’s CN Tower Maple Theatre. This is a unique opportunity to see the 73-minute, animated feature and meet some of the key people behind one of the most successful online animated properties of all time.

Blue Ant Media and Mondo Media will be making a special announcement at the screening about their new partnership, which will provide a truly unique opportunity for Canada’s animation and creative community.

There will be a panel and Q & A immediately following the film that will include a discussion about Dick Figures The Movie and the new partnership in Canada. The panel will include some of the top minds in digital animation including: Graham Bennett (Strategic Partner Manager at YouTube), John Evershed (CEO Mondo Media), Brendan Burch (CEO Six Point Harness) and Joshua Bowen (Supervising Producer Blue Ant Media).

Seating is limited so get your tickets now at http://www.bufferfestival.com/tickets/.