Bite on Mondo: the start of a conversation with Josh Bowen 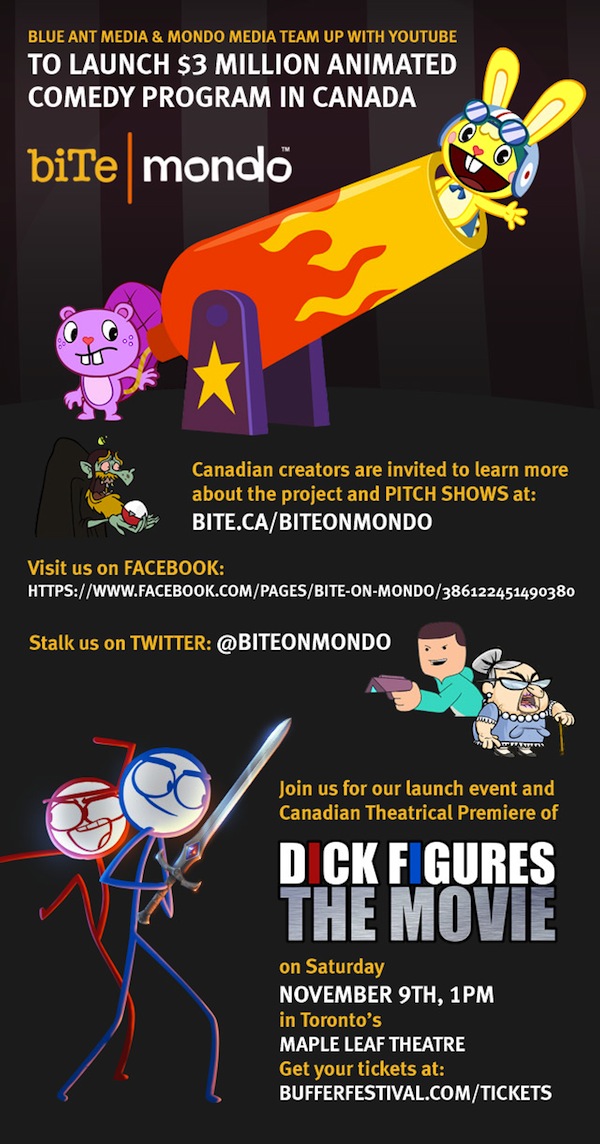 As announced earlier today, Mondo Media has teamed up with Toronto-based Blue Ant Media in a joint production called Bite on Mondo (Blue Ant owns the comedy-oriented TV channel Bite, thus the name). It’s an ambitious endeavour that’s aimed at creating a pretty massive volume of short form animated programming. They’re reaching out to the creative community, starting today. We’re running a button in the sidebar that links to their submissions page, or you can click here to check it out.
Josh Bowen is the Supervising Producer for the initiative. Josh has worked with Mondo before, on his own series, Goodwin VS Badwin. We spoke with him at the time and he shared his thoughts on producing animation. You can read that piece here.
I was able to get Josh to talk a little bit about the new Bite on Mondo initiative. I’m going to run the first part of the chat here, and then I’m going to invite you readers to ask any questions you might have of Josh in our comments. I’ll get him to answer in part two of this chat.
MV: By way of introduction, why don’t you just tell the readers what the hubbub is all about.
JB: “Bite on Mondo” is unique program intended exclusively for Canadian talent and creators. Blue Ant will be sourcing and producing 40-50 animated short format (2.5-3 min) pilots  aimed at a 18-34 male skewing demo. The content will air on Mondo’s YouTube channel (1.8 million subscribers and home to hit properties like Dick Figures and Happy Tree Friends) The best pilots will graduate into multiple episode orders for a total of 236 videos that roll up into 26 X half hour compilation show for TV. The extensive piloting model allows Blue Ant to take chances and test a variety of different properties and talent with the goal of finding a hit.
Our goal is to find the next hit adult animated property. We test a lot of different pilots and let the audience decide what they want to see more of. It’s a very darwinian process that Mondo has used to find other successful hit shows like, Happy Tree Friends and Dick Figures.
MV: So how did this come about?
JB: Given that Canada has a diverse talent pool of creative talent and governmental support afforded to the entertainment industry we saw an opportunity to create a Canadian centric slate of content with a similar strategy to the 2011 YouTube funded content program.

MV: You had a history with Mondo, what brought you to Blue Ant? Why not just set up Mondo Canada?

JB: Blue Ant is one of the fastest growing media companies and Mondo needed a partner that understands the Canadian landscape and could help negotiate a project of this scale.  Without Blue Ant’s expertise and efforts, this project would have never come to fruition.  As well, Blue Ant compliments Mondo’s digital distribution platform by providing a traditional broadcast component that will allow us to roll the slate in to 26 half hours for TV.

MV: And your role? What does “Supervising Producer” do?

JB: I’m responsible for finding projects and developing shows based on pitches from the Canadian Creative community. Furthermore, I am tasked with putting together production teams and helping facilitate the production of the slate.
MV: Ok, so this is rolling out at your event, the big screening on….
JB: November 9th at 1PM inToronto’s CN Tower Maple Leaf Theatre
MV: And you’re going to have a Q&A after to discuss. Who’s taking part?
JB: The panel will feature some of the top minds in digital animation having tremendous knowledge in producing successful cartoons on YouTube and scaling them to other platforms. John Evershed (CEO, Mondo Media), Graham Bennett (Strategic Partner Manager, YouTube), Brendan Burch (CEO, Six Point Harness and Executive Producer of Dick Figures The Movie) and will be moderated by Aaron Simpson (VP Animation, Mondo Media) and me, Joshua Bowen (Supervising Producer, Blue Ant Media). Tickets to the event are $15 each and all proceeds go toward supporting the festival.

So the nut of the program is this:
JB: We are looking for adult animated show ideas from Canadian writers, animators, designers, voice actors etc. We will be producing 40-50 pilots (avg. 3mins per episode) sourced from Canada’s creative community.
The pilots will be tested on Mondo’s YouTube channel and the successful pilots will graduate to a series order.
The slate will be comprised pilots and episodes that total approximately 236 episodes.
Our goal is to find the next hit adult animated property. We test a lot of different pilots and let the audience decide what they want to see more of. It’s a very darwinian process that Mondo has used to find other successful hit shows like, Happy Tree Friends and Dick Figures.
I’ll try to get into some more detail with Josh in our follow up. I haven’t had a chance to look through the submissions guidelines yet. In the meantime, I’m asking the readers to chime in. Ask Josh anything you want. The notion here is that this is a unique opportunity in Canada, and the people behind it are trying to make themselves as available as possible to the creative community. I invite you to take advantage of that.
m