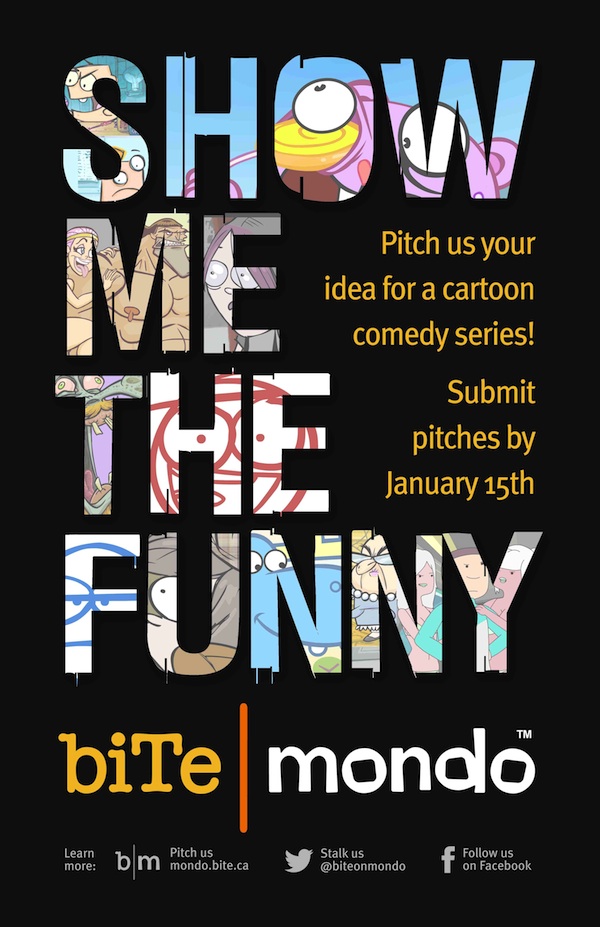 The plan is to commission about a billion shorts that will be distributed via the Mondo Media Youtube channel, as a means of piloting concepts that will then be spun into series. Those series will also run on Mondo’s Youtube channel, and then they’ll be compiled into some kind of half hour format and aired on Bite TV. It’s an ambitious project, and right at the middle of it all is a fella named Josh Bowen. We’ve talked to Josh before, but I wanted to get a bit more info on the Bite on Mondo gig, so we strapped ourselves to our keyboards and dove in.

Here’s what I’ve got so far.

MV: Alright, so, you had the big launch at the Dick Figures premiere. Congrats on the event, well attended.

MV: No one embarrassed themselves on the panel, even you.

MV: And a nice chance to say hi to the American cousins, Aaron (Simpson) and John (Evershed).

JB: and Brendan (Burch). It has been a few weeks since we launched the project. The first submission deadline is JANUARY 15TH!

JB:  Yes, especially with the Holidays knocking on at the door.

MV: What was the goal of launching at the event, announcing that way?

JB: We really wanted to have a grassroots event, geared toward the creative community. The Dick Figures Movie is a great example of how a show can start as a short and scale up. I think it’s an inspiring story to any aspiring creator, and it’s a case in point example of what we’re trying to replicate with the Canadian production slate. We are looking for the next hit adult animated comedy series, and by producing at such scale we are able to take more risks on a variety of different creators

MV: So the event brought in fans and creators alike?

JB: Yes, writers and artists. I think it’s important to point out that we are not exclusively looking for talent who can draw and animate. We are also looking for writers and most importantly storytellers.

MV: In any shape and form?

JB: Yes, we take pitches in a variety of different ways (written treatment, animatic, completed short etc.) However, we usually make a green light decision based on a 4-5 page pilot script.

MV: And have you green-lit anything yet? I know it’s early days, but….

JB: No, we haven’t green lit anything yet. We won’t be green lighting projects until after the January 15th submission deadline.

MV: So, besides pitches coming in from your site, how else are you sourcing?

JB: I am reaching out directly to the creative community for ideas.

MV: When you say creative community, maybe you could describe that. How do you actually find creatives? If I were a creative person, and I was looking to join the community, and get bumped into by someone like yourself, where would that bumping occur?

JB: Bumping starts with a phone call or an email in a lot of cases. I should mention that I’m very accessible and anyone interested in pitching or having a discussion about this project I’m happy to chat: josh.bowen@blueantmedia.ca or add me on Skype: jbowen44 I’m happy to chat!

MV: but beyond that, people reaching out to you… how do you go looking? Where do you look?

MV:  So you’re just out being friendly, and jumping around online in your own time, finding stuff you like?

MV: And you’ve reached out to people you’ve found that way?

JB: Yes, I’ve found people from all of the above-mentioned resources

MV: And response is good?

JB: Tremendous! I think a lot of people are excited about this project because there aren’t many outlets/buyers for adult animation. However, the constant struggle is making sure as many people know about the project as possible. I also think talent are excited about this opportunity because it’s a grassroots initiative that is accessible to anyone with a good idea.

MV: So then, my next questions are about the submissions and talent, are you getting a lot of submissions? I’m sure readers would want to know what their chances are, what they’re up against.

JB: Yes, we have received a lot of submissions. But remember we’re also producing a lot of content, and all the content will almost exclusively be Canadian, meaning creators won’t have to compete with as much international competition.

MV: How’s the quality so far?

JB: It’s a spectrum. We’ve received some amazing ideas, and some not so amazing; and others that are good, but not a fit for our brand. The most fascinating pitches are the ones with an incredible amount of character detail. What I mean by that is, the character motivations, their interactions are so compelling that you can’t help but want to love the character, despite the flaws they may have. I think a lot of shows that are pitched come in half-baked, without being fully realized in terms of concept and character.

MV: So tell us the process for you guys. Ideas are coming in, what’s the evaluation process?

JB: We review and evaluate the ideas on an ongoing basis. We almost always get back to creators within a week of submitting a pitch. We generally don’t make notes on pitches unless a creator requests it.

MV: So within a week, a creator will know if you’re interested or not?

MV: And “we” is whom? Who is screening this stuff?

JB: I do the initial screenings. And as I said, I’m very prompt about getting back to talent. We’ve got a lot of creative freedom. Bite is looking to take some chances, and we’ve got Mondo as a distributor, who’ve got a great history of running with a lot of maverick programming. Personally, I’m nervous and excited. I’m feeling the pressure to bring great ideas to the front of the line. I started as a creator and know how frustrating it is to pitch and not get a response. I read and evaluate everything that crosses my desk, because I know creators put a lot of time into pitching content to us. And that should be respected and appreciated.

MV: And you yourself had a positive experience with Mondo, not so long ago, that you want to try to replicate here and provide for others.

JB: I definitely saw the value in Mondo’s distribution pipeline. It’s helped carve out my career. The eyeballs you get on your content online is the best advertisement for any creator.

MV: Ok, so then, what’s a show you’d want? If you could have any show, what would it be?

JB: Do I have to pick just one?

MV: Let’s say you spin off a couple pilots into a lineup on Bite, what does that lineup look like?

JB: Archer, South Park, Adventure Time. That would be my triple-decker sandwich. I love the social commentary in Archer and South Park, but love the fluid and irreverent humour and animation of Adventure Time. Ultimately, we are looking for shows that creators are passionate about that fit within the scope of adult animated comedy. We encourage creators to let their imaginations run wild. Bear in mind, shows need to be character driven. If a show is gag driven it will live and die very quickly. I think it’s important to note that our comfort zones are just a guideline for creators, and I’d be lying if I said I know exactly what we’re looking for.

So there you have it, right from the Supervising Producer’s mouth.  I’m going to try to get a bit more time with Josh soon, and ask him a few questions about how this deal is structured, on behalf of the creators. If anyone has any questions, ask, and I’ll do my best to get them answered. In the meantime, you can always check it out yourself at http://mondo.bite.ca/