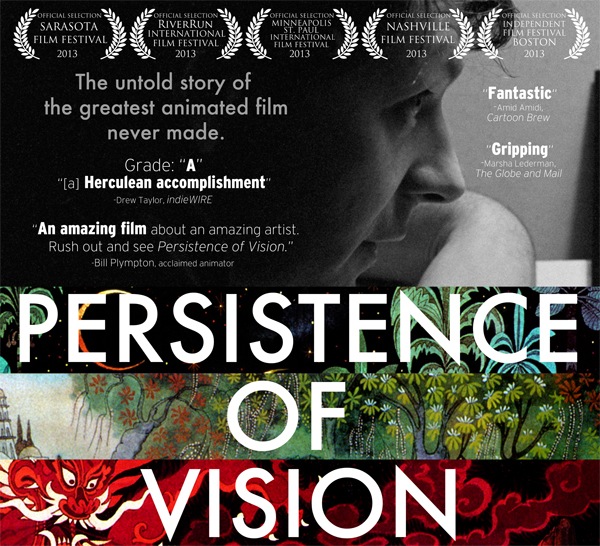 Persistence of Vision – the untold story of visionary, Toronto-born animator Richard Williams and the greatest animated film never made – will be having its highly-anticipated return to Toronto at the Hot Docs Bloor Cinema for six showings, January 10-13, 15, & 16.Featuring Q&A’s with Persistence director Kevin Schreck and with The Thief and the Cobbler animators from Toronto, Tara Donovan and Greg Duffell, this event is a must-see for animation, film, and visual arts enthusiasts, as well as movie-goers of all walks of life.

SYNOPSIS:
Striving to make the best animated film of all time, visionary and acclaimed Toronto-born animator Richard Williams (three-time Oscar-winning animation director of Who Framed Roger Rabbit) spent nearly three decades of his life toiling away on his masterpiece, The Thief and the Cobbler – only to have it torn from his hands.Using incredible animation from Williams’ lost epic, rare archival footage, and exclusive interviews with various artists and animators who worked on the ill-fated magnum opus, filmmaker Kevin Schreck brings this legendary, forgotten chapter of cinema history to the screen for the very first time.Called a “Herculean accomplishment” (indieWIRE), a “suspenseful portrait [and] superb documentary” (The Seattle Times), and a “fascinating slice of film history” (Variety), PERSISTENCE OF VISION is the “gripping” (The Globe and Mail), untold story of the greatest animated film never made.