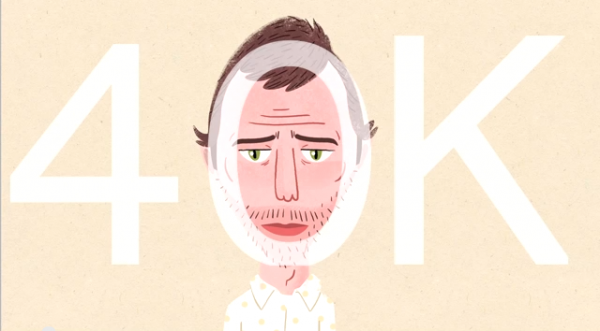 Here’s a little story about an anijam that spontaneously erupted last week.

On Monday morning, I noticed a Facebook update from musician Buck 65, known also as Rich Terfry. Rich hosts the afternoon drive show on CBC 2, something I used to listen to very regularly back when I had a commute. Rich/Buck is a very genuine and likeable dude, a generally soft-spoken music geek and his show always felt like you’re just hanging out and having a chat. He’d just broken 40 000 followers on Facebook, and wrote a heartfelt-sounding note to accompany a Thank You track that he recorded for his fans.

For whatever reason, this whole little expression of appreciation hit some kind of chord for me, and I decided that I would try to get a little video made to accompany the track. I reached out to whatever animator friends of mine were popping up on Facebook chat, and over the course of about 24 hours, almost 20 people provided a series of very short clips, all either signing or mouthing “thank you” or “thanks”. Only about 4 people turned me down (you know who you are). And once our editor at Smiley Guy Studios had some room in his schedule, we cut this thing together.

It’s not the fanciest thing in the world, but it got made, and it got made fast. There’s some joy in that. Most of the time the stuff we’re working on leaves our desks and goes off into the ether, showing up on some screen somewhere months later. By then, you’ve lost your connection to it and it’s just another piece of programming to be consumed.  But this was just a simple little thing that a small group of people decided to make and share. Smiley Guy even let me put an Odd Job Jack cameo in there.

So thanks. To everyone who contributed, thanks for this little antidote to the rest of what we do.