Ticket Giveaway in the GTA: Smiley Guy Studios is premiering Warren United on the big screen

Warren United, the hit British animated comedy about being a working-class supporter cheering on a team that’s totally crap, is coming to the big screen, and Smiley Guy Studios wants to put you in the theatre!

We’ve got 10 tickets to offer our readers in the Greater Toronto Area for the event this Thursday, June 19th, at 1:30pm, right before the England/Uraguay World Cup match. The screening will take place at the Scotiabank Theatre, and the invite includes heading down John Street after the show to have some grub at The Office and watch the game.

If you want in on the action, just e-mail the address you’ll find in the invite below. Tell them Canadian Animation Resources sent you. It’s first-come, first-serve for the 10 tickets, so as always, act fast! 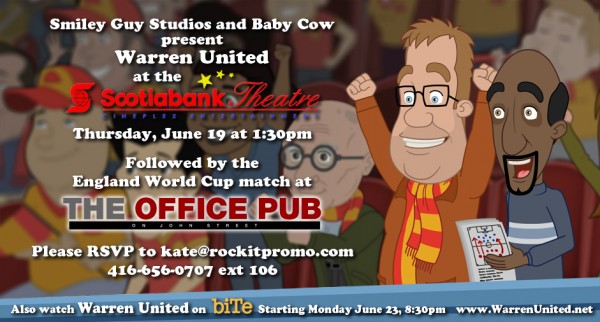