Behind-the-Scenes of The Boxtrolls and Robot Chicken

Montreal, August 26, 2014  The sixth edition of the Montreal Stop Motion Film Festival is proud to announce the release of its official program for 2014. This year, the Festival will be taking place on September 26th, 27th, and 28th in the J.A. de Sève Theater at Concordia University (1453 Mackay Street, Montreal).

The Montreal Stop Motion Film Festival, the first of its kind, has been promoting stop motion since 2009. Last year, we had a stellar presentation as we celebrated the 20th anniversary of the release of The Nightmare Before Christmas with our first full house presentation.

This years edition is proud to announce the coming of two professionals from the field of Stop Motion animation who will take us behind-the-scenes of the television series Robot Chicken and the upcoming feature film from LAIKA studio, The Boxtrolls.

Alex Kamer, animation director on Robot Chicken, will join us on Friday, September 26th to start the festival off right. Alex will talk about some of the highlights of his career in stop motion before moving onto a behind-the-scenes look at the production of Robot Chicken. Some of the shows most beloved characters will also be on display during the talk.

The release of LAIKAs stop motion production The Boxtrolls coincides with the sixth edition of this years festival. Mrs. Georgina Hayns, creative supervisor of the famous puppet fabrication department at LAIKA, will join us on September 27 to give a talk about the making of the handcrafted stop motion feature film. With a behind-the-scenes tour, she will describe the major undertaking involved in the making of this remarkable animated film.
As a special treat, production puppets will also be on display.

The Montreal Stop Motion Animation Film Festival is one of the few that can offer an up close and personal look at the different handcrafted puppets from major stop motion productions.

In addition to the 60 films in official competition, talks, and guest artists, the festival is also offering two free family screenings, presented by Mega Bloks, and six hands-on pods with animation software so that young animators can discover the magic of animation on site.

The Montreal Stop Motion Film Festival promises to be like no other festival in town!

Robot Chicken is the brainchild of Seth Green and Mathew Senreich. Based on popular super-heroes and various characters from childhood, they parody the pop culture conventions with fast paced sketches to create hilarious comedic situations using stop motion animation.
Alex Kamer has been working for several years on the series and now serves as Animation Director on its 7th season! Alex will talk about some of the highlights of his career in stop motion, beginning with how he got into it right up to his work on Robot Chicken.  He will also share his insights and a behind-the-scenes look at the production work and how they adapt to work in a fast paced environment. Some of the beloved character of the show will also be on display.

THE OFFICIAL FILM SELECTION
More than sixty stop motion films from twenty-five countries will be presented on the big screen. The jury will select a winner in each of the following categories:

The jury is composed of three members of the stop motion community: Mark Osborne, Pascal Blais, and Georgina Hayns. The winners will be announced on Sunday evening, the closing night of the festival.

OTHER ACTIVITIES NOT TO BE MISSED
A talk with Georgina Hayns, Creative Supervisor, Puppet Fab at LAIKA Saturday, September 27: 7:00 p.m.

Coinciding with the release date of The Boxtrolls, we are very pleased to announce that Mrs. Georgina Hayns, creative supervisor of the puppet fabrication department of LAIKA will be visiting the Montreal Stop Motion Film Festival on September 27!

She has been involved in all aspects of puppet fabrication for stop motion films for over twenty years. She will give a talk about the making of the handcrafted stop motion feature The Boxtrolls with a behind-the-scenes look at LAIKA’s animated feature. She will describe the major undertaking involved in the making of this remarkable animated film! As a special treat, production puppets will also be on display.

The festival will be holding two free family screenings in collaboration with Mega Bloks. The whole family will have the opportunity to enjoy stop motion animation from around the world. These films are selected from films in the official competitions program.

The festival will have hands-on sessions on Saturday and Sunday where animators and novices can get better acquainted with animation software while animating construction toys from Mega Bloks. Well have animators on site to guide artists and enthusiasts as they try their hands at stop motion animation. 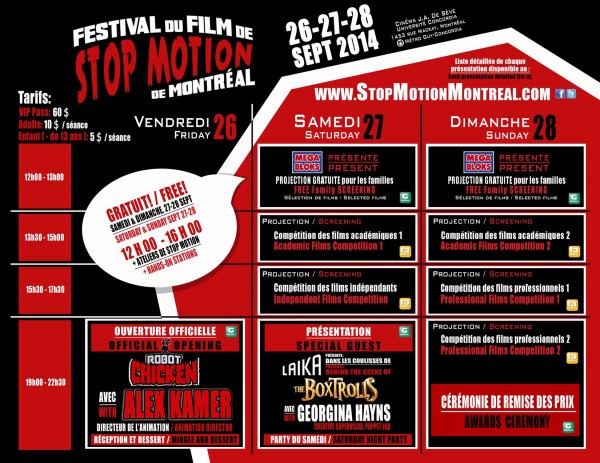 The VIP Pass, which gives you access to all sessions and activities, is on sale at www.LaVitrine.com in limited quantity. Tickets will be available for purchase at the door before each screening.

The Montreal Stop Motion Film Festival celebrates the talents of all stop motion artists. The Festival is an initiative of Erik H. Goulet, director of the Festival and teacher in the animation department at Concordia University since 2001.