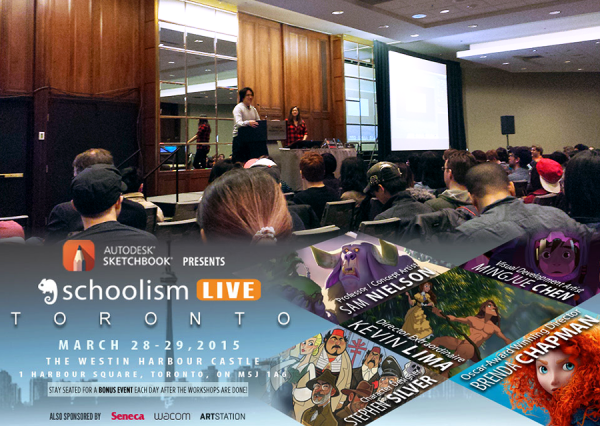 Happening this weekend was Schoolism LIVE at Toronto. (March 28th and 29th, 2015)
The event was held in downtown Toronto at The Westin Harbour Castle.

Schoolism Live is two day lecture series with option to go for one day or both. Regrettably. I only had the time for the first day but what a day it was!

Helen started with brief power point presentation highlighting what elements to focus on when creating story illustration for feature films.
Couple things she mentioned are having the illustration to be read quickly and clearly and carry emotional hinge. For the rest of her 3 hour slot, the attendees had the pleasure of watching Helen go through her illustration process from thumbnail to finish.

Sam Nielson’s lecture was about lighting for story. Before he began his painting demo, Sam went over the impact positioning of lights have on the emotion’s aspect of the piece. He discussed it by going through one of his painting and by actually lighting a person with a portable LED light. Other than briefly talking about how the light effects the mood, the rest of his talk and painting demo was spent going over the technical details of how light and reflection works in a physical space. Since his demo was not finished in the 3 hours, (mostly because his illustrations would take 20 hours) it was hard to understand and visualize where and how he would take the half finished piece to the final stage.

It was quite amazing to see Craig Mullins paint and talk during the last 2 hours of the day. As he just casually painted over a rough sketch, he answered various questions from the audience. Whether the topic of discussion was about his inspiration, pc vs apple, current trend in the industry and so forth, he just oozed much needed wisdom for the people in this commercially driven industry to think and create outside of the box.

The whole 9 AM to 6:30 PM was full of inspiration and knowledge. This was by far one of the best structured and organized workshop type event I’ve been to in a while.
Let us know your experience with this event. Especially if you attended the second day portion of it with Steven Silver, Brenda Chapman, Kevin Lima and Claire Wendling. I’d love to know and regret about amazing stuff I missed.