From our pal Ron Doucet: 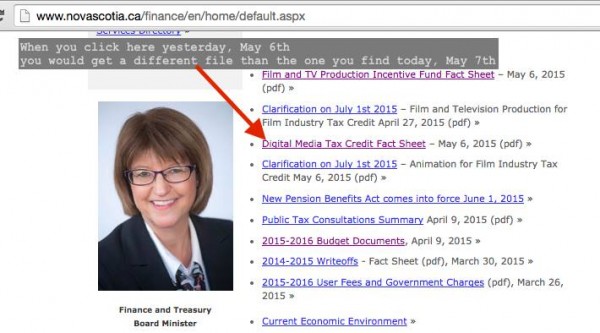 So we were told that the announcement of the Animation “deal” was made public yesterday, but that it was simply to steal the attention from the PC Filibuster.

The language in that release looked okay to us. The document was posted online for all to see. Which is in part why we were surprised this morning when they told us via email about this “new detail”
> Only 50{f2e86ea6af82e2bb048871abf045622abf0ed27fb513932dc1ee8c05a54cbefd} of the labour (half the people on the production) would be eligible!! <

Now here is where the plot thickens…
When you go to the same link, on the same website, the language is different.

Here is the difference……

YESTERDAY
A 25 per cent bonus on only animation-related labour will apply, similar to other provinces with an animation incentive.

This is a big cut to the animation industry of Nova Scotia, and as is now does not make as competitive enough in comparison to other provinces!

They did not make any announcement to the changes in the document, they just slipped in this new version without consultation or without an updated message to the public! Just a slight change like this makes a MASSIVE difference!

Via John Wesley Chisholm and Screen Nova Scotia, the document in question:

This morning I was imagining that DHX and the animation folks were getting favourable treatment, or at least being screwed less by all the Department of Finance old boys club power coup than Film and TV. Now I’m thinking there’s no brain behind the gun and no discernible direction but spiraling down into uncertainty. 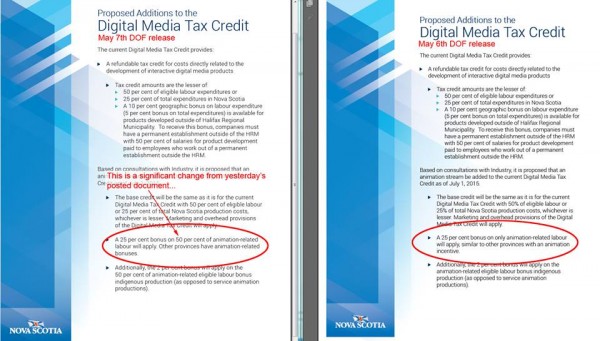 Here you will note a change on the government policy directive between yesterday and today that without anything except an edit on a web page cut the proposed incentive in half. Funny stuff. The government is clearly in chaos. Screen Nova Scotia ‪#‎nsfilmjobs‬

I’d love to be able to not call foul on the Nova Scotia government. I like to give everyone the benefit of the doubt and hope that this whole process was going to come to some mutually satisfying end. I despise fear-mongering and sensationalism. But COME ON! This is the second clear reversal of intention on behalf of the government since this debacle began.

I don’t have room in my life for much of a belief system. I just don’t. I work hard, I try not to hurt people, and I do my best to give people the benefit of the doubt. I’m not a big fan of “isms”. But I’ve found a few things, theories, philosophies, small truths, that seem to work over the long haul. One of these is a basic breakdown: “Ignorant”, or “Asshole”. I find that when ill occurs, it can be chalked up to one of the two. Here’s a story I’ll use as an example.

Years ago, in a less happy time in my life, I found myself in a grocery store parking lot, crossing an intersection that had no clear crosswalk, but was possessed of an occasionally-observed stop sign so that customers like myself could reach the door in one piece. A few steps into my crossing, I was forced into a sudden retreat, avoiding a painful incident with an aggressive sedan.

The car breezed past, showing no sign the driver neither recognized nor cared that I’d just saved him from a very long evening dealing with an accident report. He circled, and pulled into a nearby parking spot. My next steps took me directly up to the driver’s side window as he shifted about inside, preparing to depart the vehicle. I knocked on the glass. Somewhat taken aback, the driver lowered his window about a third of the way and looked at me quizzically.

“Ignorant or asshole?” I asked calmly.

Clearly, from the myriad of conversational options that my new friend could fathom given these particular circumstances, my opener was not something that held any immediate meaning.

I leaned in closer and asked again, “Ignorant or asshole?”

He stiffened a little and found his tongue. “What are you talking about?”

“Well,” I offered, “as you cruised through the stop sign just now, without so much as slowing down,” I pointed to the sign six feet to my left, “You nearly hit me.”

He began to offer a defensive retort, but I continued. “Clearly I was able to get out of your way, but that’s on me, not you. Thankfully, I’m fine. Maybe a bit shaken, but physically, I’m ok. But here’s my question to you: It’s possible you didn’t see the big red stop sign that’s been at that intersection for as long as I can remember. It’s possible you were distracted by other things, your car radio, the cell phone in your hand, or just lost in your head, and cruised through here, almost taking me out without so much as a notice. Maybe you’re just not bright. It all adds up to pretty much the same thing: ignorant.”

“Now option 2 is a little different. In this scenario you saw the stop sign, disregarded it entirely, assumed I would just get the hell out of your way, whizzed past and parked your car.” I shrugged my shoulders. “Asshole.”

He was coming around to the direction of the conversation. “So again, I ask you. Which is it? Ignorant or asshole?”

“Fuck you.” he spurted at me from behind the safety of his car door, as I reached into my left breast pocket.

“Ok then,” I answered, peeling the backing off the five inch sticker in my hand. “Asshole it is.” I pressed the white rectangular label I’d printed at work a few weeks before to the outside of his driver side window. Bold, black helvetica smiled back at me: A-S-S-H-O-L-E. It practically glowed.

I turned on my heel and proceeded into the store. Those Doritos weren’t going to wait forever.

So now I have to wonder, Nova Scotia. It seems you’ve left us with a similar conundrum. You’re destroying an industry that’s fought huge odds to rebuild itself after your last admitted blunder. You’ve twice reversed or altered your position in your attempts to seek some kind of alternative, both times telling industry reps what sounded like good news only to shift gears within hours and without consultation or notification. The very cuts in question are a reneged electoral promise from the get go.

So what’s it going to be Diana Whalen? Ignorant or Asshole? Because I just don’t see a third option here. And frankly, both one and two kinda beg for your resignation.