press release: Smiley Guys unleashing the CURSE OF CLARA, just in time for the holidays, on CBC!

Full disclosure, I’ve got a personal stake in this one. In my other life, I’m the director of development at Smiley Guy Studios in Toronto. I’m also an in house producer and director. In that capacity, I’m immensely proud to share the press release for the Curse of Clara: a Holiday Tale. The Smiley crew has been racing against the clock to get this ready for the holidays, and they’re doing an amazing job. It’s been a professional goal of mine to make a Christmas Special, so for us to be on CBC the same night as the Grinch, the real one, not the Jim Carrey thing, is a dream come true.

So that’s my little intro. Here’s the release.

Note: I wasn’t going to single anyone out in my little ramble, because that’s a road that never ends. But Mathias’ comment needs repeating. Mathias Horhager and I get our names in the press release, since we’re credited as the directors on it. But Aaron Hong was our art director. The whole show is his look and without him, it wouldn’t be what it is. So props to our (in this press release) unsung hero. 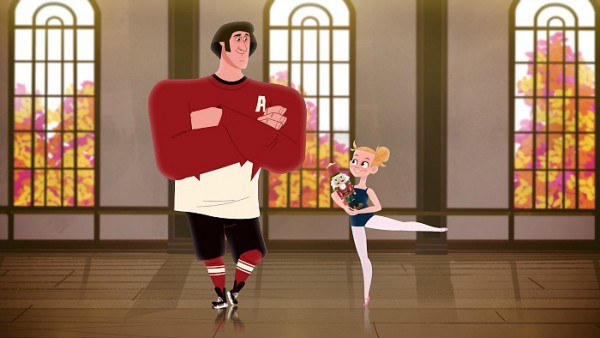 THE CURSE OF CLARA: A HOLIDAY TALE premieres December 14 on CBC-TV

TORONTO (November 19, 2015) – Smiley Guy Studios is decking the halls with THE CURSE OF CLARA: A HOLIDAY TALE, a new original animated special airing on CBC-TV as part of its holiday programming lineup. A young dancer’s dreams come true when ballet, hockey and the holidays converge. Inspired by the autobiographical short story “The Curse of Clara or My Big Fat Disappointment” by Vickie Fagan, the 30-minute special is set against the backdrop of The National Ballet of Canada’s The Nutcracker and the 1972 Summit Series, a Canada-USSR showdown that shaped hockey history. THE CURSE OF CLARA: A HOLIDAY TALE stars Hockey Hall of Fame inductees Phil Esposito and Bob Cole (Hockey Night in Canada) and National Ballet of Canada Prima Ballerina Karen Kain as themselves with Sheila McCarthy (Little Mosque on the Prairie, Emily of New Moon) as the narrator, Sara Botsford (E.N.G., Legal Eagles, Still of the Night) as the ballet mistress and Saara Chaudry (Max and Shred, Degrassi) in the roles of Vickie and Clara. THE CURSE OF CLARA: A HOLIDAY TALE premieres December 14 at 7 p.m. ET/PT (7:30 p.m. NT) and rebroadcasts December 25 at 5:30 p.m. ET/PT (6 p.m. NT) on CBC-TV.

In this delightfully heartwarming holiday tale, Vickie, a small-town girl, is accepted into the prestigious National Ballet School in Toronto, and lands the coveted role of Clara in the Company’s annual production of The Nutcracker. Things look like they couldn’t get any better. And they can’t, because that’s when Vickie finds out about the mysterious “Curse of Clara”. According to local legend, the young girls that star in the production almost never go on to become professional ballet dancers. Thankfully, she has a good friend, the 1972 Summit Series, and imaginary mentor Phil Esposito to keep her “on pointe”.

As Prima Ballerina with The National Ballet of Canada, Veronica Tennant, won hearts and accolades dancing with such luminaries as Rudolf Nureyev and Mikhail Baryshnikov. She has since garnered acclaim as a gifted filmmaker, producer/director – winning several awards, including the International Emmy (CBC). Founding Veronica Tennant Productions in 1997, her extensive list of programs for CBC, Bravo! and Global Television, range in genre, from arts-performance to drama to documentary. She has written two children’s books, including The Nutcracker, illustrated by Toller Cranston. VIDA Y DANZA, CUBA was broadcast nationally in both Canada and Cuba, and most recently, her multi-media stage-show, NIÁGARA~ A Pan-American Story, premiered during PANAMANIA, the Arts and Culture program for TO2015. Veronica Tennant was named Companion of the Order of Canada in 2004, the country’s highest honour. For more information, go to veronicatennant.com.

Vickie Fagan is the founder of Fagan Media Group. She is an award winning producer, writer and filmmaker, specializing in arts programming. Her television background includes over fifteen years with Chum Television, where she worked as a producer of documentaries, short films and series
television. Her writing has been featured in the Globe and Mail and a weekly blog on Zoomer Media. She is producer and writer on THE CURSE OF CLARA: A HOLIDAY TALE, based on an autobiographical short story written by Fagan and published in Descant Literary Journal. For more information, go to faganmediagroup.com.