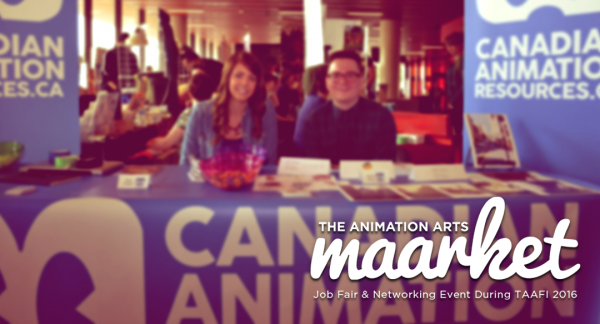 From April 23 to 24, the Animation Arts Maarket returns during the TAAFI 2016 festivities held at George Brown College’s Waterfront Campus in Toronto.

Animation and VFX freelancers, graduating students and industry veterans: there is a boom in Canada right now, and you could find the perfect animation or VFX opportunity in the Animation Arts Maarket. During the festival, TAAFI’s Maarket remains the best place to meet all the hiring studios in one place. The best part is that Maarket registration is free.

STUDIO FLOOR – these studios and organizations are meeting with talent in the Maarket:

SKYSHIP LOUNGE sponsored by Skyship Entertainment – located on the lower level learning landscape in the Maarket space. The Skyship Lounge is a cool space to hang out and mingle with peers and local artists. Complimentary activities include:

Along with the TAAFI 2016 special guests and fun activities, this will be an “Animation Job Fair” unlike any other and it’s free to attend, so register today: http://maarkettaafi2016.eventbrite.ca.

Find that perfect job at the Animation Arts Maarket during TAAFI 2016!