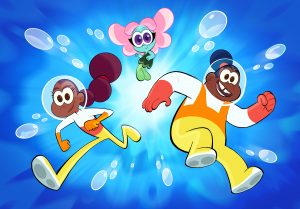 GURU STUDIO DIVES INTO THE BIG BLUE WITH CBC

This fresh original show follows sibling underwater adventurers Lettie and Lemo and their quirky submarine crew as they explore and protect a vast ocean covered planet from ship stealing crabs, know-it-all jellyfish and a health inspector shark!  Along the way, they unravel deep secrets and the true origins of their newest recruit, the mysterious Bacon Berry.

The series will immerse kids 4-8 into a fantastical universe filled with offbeat humour and high-stakes adventure. “Imagine the Millennium Falcon helmed by a colourful cast of marine misfits! Big Blue will drop young viewers into a bold new world of comic adventure and spark their curiosity about the earth’s oceans,” says Mary Bredin, EVP of Content and Strategy at Guru.

“From the moment we saw Gyimah’s designs we knew we wanted to be part of Big Blue,” says Marie McCann, Interim Senior Director of Children’s Content.  “We at Kids’ CBC are excited to be working with Gyimah and Guru Studio to develop this stunning creator-driven concept.”

Joining Guru’s roster of award winning series such as Justin Time, Paw Patrol and Dinopaws, Big Blue comes from the mind of acclaimed artist and Guru Designer, Gyimah Gariba. “Creating a diverse cast of aspirational heroes was really important to me. Connecting to a hero onscreen can bring a child closer to being a hero in their own life,” says Gariba, whose distinct style has been praised by everyone from Rihanna to Forbes Magazine.

Growing up in Ghana, Gyimah discovered his love of drawing while bringing his favourite cartoon characters to life. He moved to Canada 6 years ago and finished his animation studies at Sheridan College. Gyimah was a runner up for the prestigious Golden Baobab Children’s illustrator award. In 2015 Forbes Magazine named him one of “15 Young African Creatives Rebranding Africa”.

Kids’ CBC creates entertaining and inspiring media for children and the grownups who care for them. As Canada’s national broadcaster we continue our tradition of excellence an innovation in children’s content and reach our audience through CBC Television, our websites and social platforms.