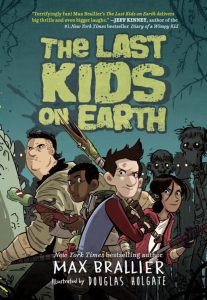 The comedic book series, created and written by Max Brallier, and illustrated by Doug Holgate follows thirteen year old Jack Sullivan and a band of suburban middle schoolers who live in a decked-out tree house, play video games, gorge themselves on candy, and battle zombies in the aftermath of the monster apocalypse. It’s a hilarious series filled with wisecracking kids, crazy gadgets, and a lifetime supply of zombies and giant-sized monsters that has been described as Diary of a Wimpy Kid meets The Walking Dead.

The highly anticipated third installment THE LAST KIDS ON EARTH and the NIGHTMARE KING will be released on September 26th, 2017 by Viking, an imprint of Penguin Random House.

MAX BRALLIER is the New York Times bestselling author of more than thirty books and games, including the middle-grade series The Last Kids on Earth. Under the pen name Jack Chabert, Max is the creator of the Eerie Elementary series for Scholastic Books and author of the New York Times bestselling graphic novel Poptropica: Mystery of the Map. He is the creator of Galactic Hot Dogs, a middle-grade adventure series, and has written books for properties including LEGO, Adventure Time, Regular Show, and Steven Universe. Max has written for adults, including the pick-your-own-path series Can YOU Survive the Zombie Apocalypse? and an entry in the zombie anthology Nights of the Living Dead. In the olden days, Max was a game designer for the virtual world Poptropica and worked in marketing at St. Martin’s Press. Max lives in New York with his wife, Alyse, and daughter Lila.

ATOMIC CARTOONS is Thunderbird’s award-winning animation division which is recognized internationally as one of the leading animation studios in North America. Since its founding more than 20 years ago, Atomic has worked for clients such as Marvel Animation, Netflix, Cartoon Network, Nelvana, Warner Bros. and Walt Disney to name a few. Some of their work includes Beat Bugs, Little Charmers, Marvel’s Avengers Assemble, Rocket Monkeys, Counterfeit Cat, Max & Ruby and Transformers Rescue Bots.