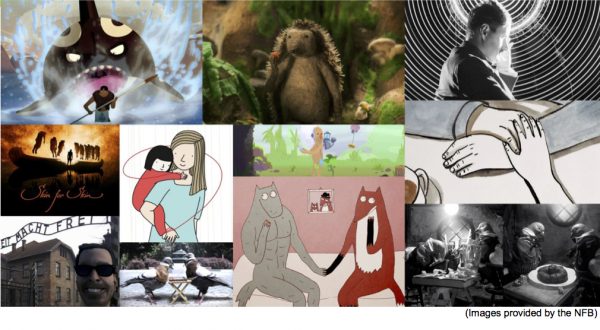 A leader in auteur animation for over 75 years, the NFB has 12 new short films showcased at the 2017 Ottawa International Animation Festival (OIAF), including eight in official competition: Matthew Rankin’s THE TESLA WORLD LIGHT; Chintis Lundgren’s Manivald; Eva Cvijanovic’s Hedgehog’s Home; Christopher Auchter’s The Mountain of SGaana; Malcolm Sutherland’s Simulated Life; and three films by Chris Lavis and Maciek Szczerbowski: We Drink Too Much, We Eat Shit and Square Saint-Louis.

Four other NFB films are being screened in the festival’s Canadian Panorama category, including two new works by Oscar-winning NFB animators: the latest from Torill Kove, Threads; the world premiere of Éléonore Goldberg’s Mon Yiddish Papi; Kevin D. A. Kurytnik and Carol Beecher’s Skin for Skin; as well as Chris Landreth’s Be Cool, from the Naked Island series.

There’s also a VR experience from Theodore Ushev, a retrospective on a pioneering Canadian animator, Ottawa’s Evelyn Lambart, and more, as OIAF runs from September 20 to 24.

Matthew Rankin’s visually stunning THE TESLA WORLD LIGHT, produced and executive produced by Julie Roy, comes home to Canada after its world premiere at the International Critics’ Week during the Cannes

Short Animation Made for Children 6-12 (Competition)

Haida filmmaker Christopher Auchter’s The Mountain of SGaana, co-written with Annie Reid and inspired by a traditional Haida legend, turns the ancient tale of master sea hunter Naa-Naa-Simgat on its head in a work produced by Shirley Vercruysse and executive produced by Vercruysse (Pacific and Yukon Studio) and Michael Fukushima (Animation Studio).

This category features four titles from Naked Island, a series of super-short and incisive films by some of the country’s top animators, blending the art of animation and advertising to promote self-reflection through dissent, satire and wit. Simulated Life, by Malcolm Sutherland, joins three shorts by the Oscar-nominated animation duo of Chris Lavis and Maciek Szczerbowski (Madame Tutli-Putli): We Drink Too Much, We Eat Shit and the Clyde Henry Productions/Tourisme Montréal/Roméo & Fils co-production Square Saint- Louis. The Naked Island series is produced by Jelena Popović and Maral Mohammadian of the NFB English Animation Studio, with Michael Fukushima as executive producer.

The Canadian Panorama category features the eagerly awaited OIAF debut of Oscar winner Torill Kove’s latest NFB/Mikrofilm AS co-production, Threads, an exploration of the beauty and complexity of parental love from the director of such modern classics as the Academy Award-winning The Danish Poet (2006). The film is produced by Lise Fearnley and Tonje Skar Reiersen for Mikrofilm AS and Michael Fukushima for the NFB’s English Animation Studio.

This section also boasts the world premiere of Éléonore Goldberg’s Mon Yiddish Papi, in which the animator keeps a promise to her late grandfather to tell the harrowing story of his experiences in World War II and celebrate his life. Produced by Karine Dubois (Picbois Productions) and Julie Roy (NFB), and executive produced by Roy.

A dark allegory of greed and spiritual reckoning set during the early days of the fur trade, Skin for Skin is the latest film by Calgary’s Kevin D. A. Kurytnik and Carol Beecher, and is produced by Bonnie Thompson (NFB) and Beecher (Fifteen Pound Pink Productions), with David Christensen as executive producer.

and timely notion of cultivating our own place of safety, dignity and comfort, no matter how big or small.

The festival’s VR @ OIAF program will feature the Ontario premiere of Blind Vaysha VR, a virtual reality adaptation of Theodore Ushev’s Oscar-nominated short Blind Vaysha. Produced by the NFB with the participation of ARTE France and ICI ARTV, this immersive experience utilizing Samsung Gear technology made its world premiere at the Annecy film festival. Blind Vaysha is produced for the NFB by Marc Bertrand and executive produced by Julie Roy.

The National Film Board of Canada (NFB) produces groundbreaking animation at its studios in Montreal and at NFB centres across Canada, as well as via international co-productions with many of the world’s leading auteur animators. The NFB is a leader in developing new approaches to stereoscopic 3D animation and animated content for new platforms. The NFB has created over 13,000 productions and won over 5,000 awards, with NFB animation accounting for 7 of the NFB’s 12 Oscars, as well as 6 grand prizes at France’s Annecy International Animated Film Festival, 4 Palmes d’Or at the Cannes Film Festival and 2 Golden Bears at Berlinale. To access acclaimed NFB animation, visit NFB.ca or download our apps for mobile devices.