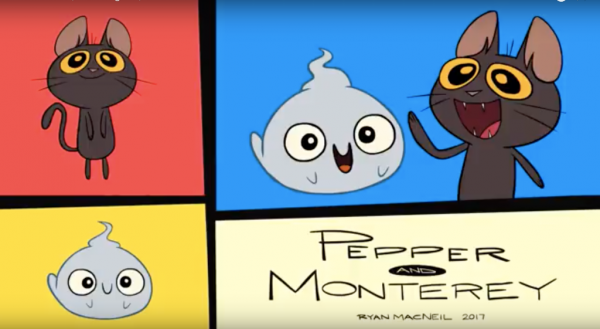 Ryan put a ton of work into the various challenges, and responded incredibly well to the feedback from the judges. He also claimed the audience vote as well, so he came out the clear winner in the end.

So now begins the development process. Ryan will work closely with the team that helped shepherd Counterfeit Cat under a “no mandatory notes” philosophy. Last year’s winner, Andy Greiling, is about to see his creation, “the Grim Repo Club”, brought to market after an intense development cycle, so we’ll have to wait and see how that fares.

Startoon has been a really interesting attempt at finding new ways to bridge the gap between creators and their audience. There’s been a ton of great ideas pass through the program, and hopefully it will be back better than ever. We need programs like this in Canada, and we’re going to try to keep improving it. Our broadcast structures don’t favour risk, so when an organization like the Shaw Rocket Fund tries to change the conversation a bit, and puts money behind doing things differently, it’s exciting.

So congrats to Ryan! And here’s his winning video: