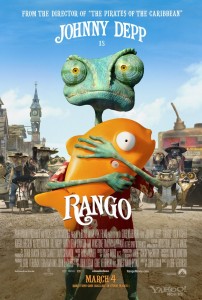 Gore Verbinski (Pirates of the Caribbean) is making a 3D Feature about a lizard.  Johnny Depp is voicing the lizard.  That’s just about the full extent of most mainstream coverage of Rango.

They’ve released a very short promo that shows an interesting approach to voice record.  They seem to have shot the film in a limited live-action cut first, actually putting the voice talent in a room together and getting true performances out of the actors.

There’s an obvious plus side to this.  Firstly, the vocal performances can’t help but be at least a little more inspired.  Being face to face while delivering dialogue, getting physical on a soundstage, this has to beat the show-up-to-the-booth-in-your-pyjamas approach that’s become the norm.  Most voice actors never even pass each other in the hall on Hollywood features.  Also, and particularly with talented physical actors like Depp and Bill Nighy, the reference for the animators will be invaluable.  Watching the nuances of even broad performances like we’re seeing here is a huge bonus for the artists working on the picture.

The possible down-side is that this footage, in the wrong hands, becomes limiting.  The right artists, working with the right director and producer, and the right supervisors, can take this footage and use it as both inspiration and subtle reference.  The more typical scenario would see the artists forced to slavishly reproduce the performances and the whole process gets reduced to a poor man’s motion capture and an opportunity lost.

Published in commentary and Uncategorized