Dominic von Reidemann is a regular contributor at suite101.com.  Suite 101 is down for a rehaul, so Dominic’s ours at the moment.  He’s sharing some reviews of the films he took in while at last weeks’ Animation Festival in Ottawa.  Here are his thoughts on Paul Bush’s BABELDOM:

Paul Bush’s BABELDOM is lazy filmmaking at its finest. 1/5. 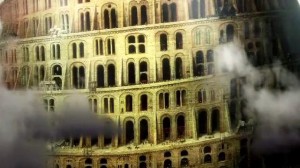 (This film was screened at the 2012 Ottawa International Animation Festival.)

Kludge together 90 minutes of random security camera footage, “plot” filmed on Cousin Mike’s Canon DSLR and a bunch of animated graphics ripped off the Internet, add some pointless babble (heh) about an ever-growing, all-consuming city, and you have Paul Bush’s latest film BABELDOM.

Bush’s ‘found footage documentary’ describes itself as “an elegy to urban life, against the backdrop of a city of the future.”  Perhaps I’m too uncultured to appreciate what Bush was trying to convey, but I found myself constantly reminded of Hans Christian Andersen’s The Emperor’s New Clothes while watching this flick.

BABELDOM follows two lovers – how do I know they’re lovers? Because the film’s précis tells us so; I didn’t get any sense of a relationship between the two – as they discuss this strange “city of the future” that’s so big, “you could meet youself (sic) at birth and on your deathbed.”  Please note that, when I say ‘discuss’, I mean the guy natters at the woman for approximately 85 of those 90 minutes.  There’s little or no sense of interaction or relationship between the two.  For all the filmmaker has given us, the guy in this film could be just some crazed stalker.

Bush has reversed the usual MO for “found footage” films like Chronicle or Cloverfield: instead of passing created scenes off as film footage that someone mysteriously discovered, he grabs a bunch of security camera clips, animation found on the Internet and edits it together to make his movie.  The ethics of this approach notwithstanding, the director can’t turn this into a compelling – or even coherent – narrative.   It’s just disconnected rants about the city and its development interspersed with random scientific facts.  Not even a strip tease from several CGI’ed lovelies could save this flick from its turgid sense of importance.  There’s another scene where it’s suggested the two lovers are communicating over time as well as space, but that little piece of plot doesn’t get enough explanation to make us truly understand what the frak’s going on.

And that merely confirms what I suspected about this movie right from the get-go: it’s an example of creative laziness with connections made but not explored.  The film’s title suggests the Bible story but that connotation is not developed – unless you claim the man’s narrative is an advanced form of babble, which negates the entire movie right there.  Add the kludged-together footage, the lack of plot, characterization or any kind of development and BABELDOM is 90 minutes I ain’t getting back.  It gets a 1/5.