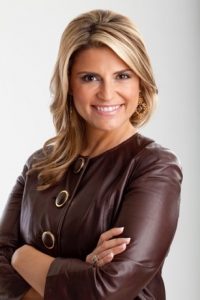 Out of the Blue to be Rebranded 9 Story USA

Toronto, Canada – June 18, 2018 – 9 Story Media Group is pleased to announce the appointment of Angela C. Santomero to the newly established role of Chief Creative Officer. As CCO, Santomero will report to President and CEO Vince Commisso, and lead the creative content strategy across all of 9 Story Media Group. The appointment follows 9 Story’s recent acquisition of Out of the Blue Enterprises, which was co-founded by Santomero.

“I am excited to welcome Angela to the 9 Story team,” said Commisso. “Angela is an absolute creative powerhouse with an unparalleled track record of creating hit kids shows. Our team has worked with Angela for many years on both Daniel Tiger’s Neighborhood and Creative Galaxy, both tremendously successful franchises. Her appointment signals our continued commitment to creating great content for kids and helps pave the way for future growth.”

With Santomero’s appointment, Out of the Blue will be rebranded 9 Story USA. The New York based creative studio will be the anchor of 9 Story’s creative development, formative research, and creative stewardship across current series. The studio will continue to be supported by key development staff and operations in Toronto and Dublin.

“I am thrilled to be broadening my creative vision in our New York studio where creative has always come first,” said Santomero. “With 9 Story’s global reach and commitment to quality, and our trusted approach, there is a tremendous opportunity to further enhance and grow an exceptional slate of original and enriching content that kids and families can feel good about. As Out of the Blue transitions to 9 Story USA, we will continue to work with our talented team in New York while we expand our creative vision worldwide.”

9 Story Media Group is a leading creator, producer and distributor of kids and family focused intellectual property. Its award-winning animation studio, Brown Bag Films, is recognized around the world for best-in-class brands such as Doc McStuffins, Daniel Tiger’s Neighborhood, Octonauts, Wild Kratts, Peter Rabbit and The Magic School Bus: Rides Again. The company’s international distribution arm, 9 Story Distribution International based in Dublin, represents 2,700 half-hours of animated and live-action programming, seen on some of the most respected international channels and platforms. Its in-house consumer products division, 9 Story Brands, builds international entertainment brands for kids, with expertise across creative, brand marketing, and licensing. With facilities in Toronto, Dublin, Manchester and New York, the 9 Story Media group of companies employ over 600 creative and corporate staff. www.9story.com