OIAF 2011 wrap up, UPDATED with full list of winners. 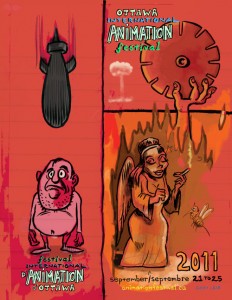 It’s Monday morning, and the 2011 edition of the Ottawa International Animation Festival is done.  Sunday was a quiet one for me, like many others, but as always, I made it a point to be at the closing ceremonies last night.  The press release isn’t out yet, so a complete list of winners eludes me.

Off the top of my head, I can tell you that Phil Mulloy’s Dead But Bot Buried won for best feature animation, Amanda Forbis and Wendy Tilby won the prize for best Canadian Animation, and Ben Cady’s the Goat and the Well picked up two awards, one for best undergraduate film, and the NFB audience choice award.

Dominic Von Riedemann, over at Suite 101, is a little more on his game than I am, and has his coverage of last night already available.  You can check it out here.

I’ll update here later with further coverage, including my favourite moments and some specific thank yous.

Ottawa’s CTV news managed to snag a quote from Pilar Newton, the unofficial spirit of the festival.  Here’s the link. There’s video on there too.

The Ottawa Citizen has a full list of the winners.  Here’s the link.

Toronto artist, Tabitha Fisher (who I didn’t get to meet!) shares her experience here.

And now, the press release from the festival announcing the winners:

Ottawa, September 25, 2011 – The Ottawa International Animation Festival (OIAF) came to an end with the highly anticipated closing ceremonies which were held this evening at the Canadian Museum of Civilization. OIAF organizers announced the 2011 winners of the official competition during the ceremonies.

This year’s OIAF, which was held from September 21 to 25, was a tremendous success.  The festival was packed with special screenings, sold out workshops and high profile networking events such as TAC.

The OIAF is a major international film event that attracts more than 28,000 film buffs, art lovers, producers, and cartoon fans from around the world.

“For its powerful combination of style and narrative, leaving a memorable impression.”

The 2011 GRAND PRIZE for Best Animated Feature is:

“For its innovative way of filmmaking, bold use of minimalistic graphics, original use of sound and subversive humor.”

“For its authenticity, sensitivity and compelling execution.”

The 2011 GRAND PRIZE for Best Commissioned Animation is:

“Imaginative use of everyday images and punchy timing.”

The 2011 Best Animation School Showreel is:

“The 3 animation school programs were consistent and were expressing the spirit of each school. We chose one program for its diversity of styles and subjects, and overall quality of the films.We award Bezalel Academy of Arts and Design as the best animation school.”

“For its accomplished use of film language to tell a stark and unsentimental story.”

“For its sympathetic storytelling.”

The 2011 Best Experimental/Abstract Animation is:

“For its unique aesthetic sense of line and excellent timing.”

“For its vivid visual metaphor.”

The 2011 Adobe Prize for Best High School Animation is:

“Professional level of storytelling and filmmaking.”

“For its refreshing sense of humour.”

The 2011 Best Undergraduate Animation is:

The 2011 Best Graduation Animation is:

“For its lightness of touch and synchronized swimming.”

The 2011 Best Promotional Animation is:

“For its directness, brevity and sense of purpose.”

“The most successful musical visualization in the competition.”

The 2011 Best Short Animation Made for Children is:

The 2011 Best Television Animation Made for Children is:

The 2011 National Film Board of Canada (NFB) PUBLIC PRIZE is:

About the Ottawa International Animation Festival