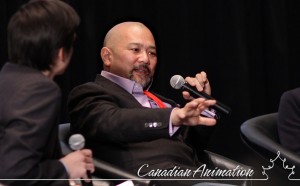 Following part one of our interview with Michael Fukushima, we present, care of Grayden Laing, Michael’s presentation at this year’s Reel Asian International Film Festival.  Michael is the first producer to be honoured by the festival.  Traditionally they recognize directors.

A selection of films were screened, including Michael’s first film, Minoru: Memory of Exile, that he directed in 1992.  The film is an animated documentary of his father’s experience as a Japanese Canadian during World War 2.

Minoru: Memory of Exile by Michael Fukushima, National Film Board of Canada

Michael was also joined by two directors, Howie Shia, and Lillian Chan, for a discussion of their experience working with him.

Flutter by Howie Shia, National Film Board of Canada

Jaime Lo, small and shy by Lillian Chan, National Film Board of Canada

It was a real treat seeing these films on the big screen.  Flutter, Howie’s film, was new to me.  And, while I’ve seen Lillian’s film before, the experience of a theatre viewing actually brought a tear to my eye.

Thanks to Grayden for making the footage available(and for the picture I swiped), thanks to TAAFI for scoring me the ticket, and thanks the Reel Asian International Film Festival for recognizing the work of Michael Fukushima.

Published in News and Profiles