from the internets: LA Times On Point Analysis of Bravest Warriors Via Nelvana

I’ve been throwing around a lot of big talk lately about creative risk-taking in Canada and how we inevitably play it safe in pretty much everything we make. It’s tough, but it’s a fact we have to face, and one that we seem to understand really well in the trenches. We hear about how people can spot a Canadian show a mile away, and how it’s a label that’s not doing us any favours.

Well, if you’re looking fore an example, the LA Times recently ran a review of a bunch of shows, with a fair bit of Canadian craft among them, including the new episodes of Pen Ward’s Bravest Warriors. I watched most of the original episodes of Bravest Warriors, and was a fan. I’m going to openly admit that I haven’t seen any of this latest batch coming out of Nelvana. I’ve heard a few things. The first is that anyone I’ve talked to who’s working on it, loves working on it. Which is awesome. The second: It’s lost something.

Here’s what the LA Times had to say: This is the first season without input from (Breehn)Burns, and it shows a little. Now made under the wing of the Canadian animation house Nelvana, the series has become marginally less marvelous, a little too on point and digestible, with explanatory opening titles heretofore considered unnecessary. Still, there’s some good writing talent, including Kate Leth, who has written for the “Bravest Warriors” comic series and penned “Adventure Time” graphic novels. One hopes that the producers will remember that the biggest favor you can do your audience is not to do them any favors.

Damn. Looks like Bravest Warriors has been Canadian-ized. It’s amazing how this happens. You have a show that’s already been a show, created by one of the biggest names in the animation industry, and we still fuck around with it. The analysis here sounds so spot on in terms of the filter we put things through. Again, I haven’t seen the new episodes, something I should remedy, but when I read this it just flew off the page. This is so exactly a description of what I would fear would happen to such a show. And it sounds like it did. I’ve always asserted that at the very least, with a proven concept, a finished short film, a pilot, if it’s successful, and it’s good, then we might not fuck it up when moving it into production. But if something like Bravest Warriors, with its pedigree and previous success, can’t survive our meddling, what chance does new IP stand? 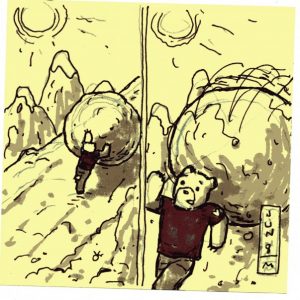 I don’t know the answer. Is there someone in the chain that should be fighting harder? Or is the architecture just too overwhelming? I honestly shiver at this. How do we not fuck up? How do we make better shows? How do we create a structure where the business understands the need to empower creativity and trust it, just a little bit more? I honestly believe that such a scenario is the best future we have for a profitable, sustainable industry. But it’s clearly a Sisyphusian mission.