from the internets: the best god-damned thing I’ve read about in forever.

Say what you will about the content they’ve been previewing online. 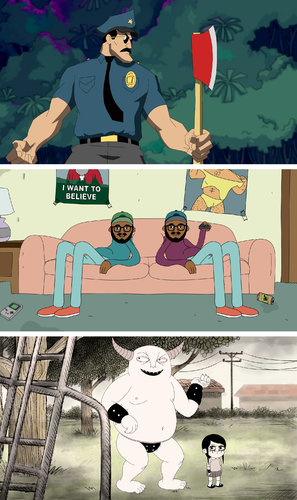 Axe Cop may not be your cup of tea, nor perhaps Apollo Guantlet.

But the situation that is playing out at Fox in LA sounds amazing. The confidence the network has put in the hands of their designated shepherds, Nick Weidenfeld and his crew, is something I’ve been conditioned to never expect in this industry. Here’s the nut, a quote from Weidenfeld regarding Fox’s thinking: “You have a TV network saying, ‘We recognize not that television is dying but there’s a change, and we are investing in figuring out how to succeed in the new era.’ ”

So basically, picture a big boardroom full of however you imagine executives to look. They’re looking at their world changing around them, and instead of fighting change, and lamenting about how things used to be, and trying to force old models down the throats of everyone subordinate to them, they throw up their hands and simply accept change. These guys don’t get it, so they hire someone who does, someone who’s not so young that he hasn’t got experience, not so young that they can’t trust him with a budget, but also not so old that he’s out of touch. They empower him, place their confidence in him, and not only do they charge him with a task, but as long as he follows a pretty clear set of rules and parameters, they allow him do the job he’s been hired to do. They fucking trust him to do the job they’re paying him to fucking do.

I hope this pays off. I hope this pays off huge. These Fox execs need to be rewarded for putting their faith in someone to do things a little differently. When you actually look at what they’re trying to do, it’s not rocket science. To most of us working in studios and toiling away on our own projects, this sounds like the kind of situation we’ve been preaching for years. And to the youngsters working on the shows, they’ve got a semi-relatable boss who can show them how to act like god-damned professionals.

Can you imagine something like this happening in Canada?

I can actually picture a situation where this could happen. It would be an extreme longshot, and you’d have to have the right people involved, but the likelihood is so infinitely minute, that it’s best just to put it out of our minds. But believe me when I say I can imagine it. There is a chemical formula for this, and they’ve spelled it out in this very article.

Now, I wonder if anyone is paying attention?