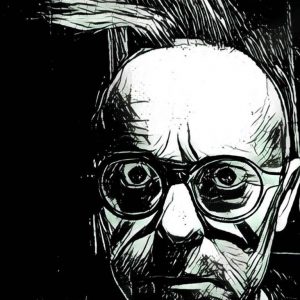 OIAF 2016 is right around the corner. It’s a big year, the festival is celebrating 40 years. I’ve been going since 1992, and from this vantage point it all seems like one long blur of faces and films.

Thankfully there are those out there with clearer memories. One of those is our very own occasional contributor, Rob Anderson. Robbie’s been posting memories of festivals past on facebook as a countdown to the event, and he’s given us permission to share them here.

Stories from the Ottawa Animation Festival.
12 days to go so I thought I would try and post a story a day leading up to the fest. Some short some long.
1998, I was lucky to get involved with, what I believe is, the first animated short to be done during the festival. 67 Aluminum plates. Spearheaded by Jan Pinkava. A bunch of awesome folks got involved and we convinced the National Gallery to let us in for the day to shoot this sculpture. We were there for almost 14 hours and then got some amazing talent involved to cut the frames and add audio. Presented the night of the closing ceremonies. The credits go by quick but you might recognize some awesome names.

T minus 11 days to OIAF.
Awkward story
1988. I believe my very first festival. Frederic Back had his film, The man Who Planted Trees, in competition. This was a very profound experience for me. I did not realize up to that moment, the power of animation and the emotion it could elicit from me. Crying like a small child, I left the theatre only to see Mr. Back speaking with a couple of other gentlemen. Still crying I rushed toward him, pushing the other two out of the way. Trying to express my deep feelings for his film, I stammered and am pretty sure I looked and sounded like an idiot. It wasn’t until years later that I saw a photo of Mr. Back sitting with one of the people I shoved out of my way, like some blathering star struck kid. It was John Lasseter. Someday I hope to meet him to see if he remembers.

The Man Who Planted Trees from Max Urai on Vimeo.

Countdown to OIAf, T minus 10 days.
The year Ryan, by Chris Landreth was in competition. Another film that made me cry. Sorry to those that I know that worked on it but it also made me angry. Turned out I was not alone. This is a good thing mind you. Art is meant to elicit an emotional response, sometimes good sometimes not. If all you do is laugh, it is just entertainment. Anyway, sitting around drinking with an amazing group of filmmakers for around the world, (yes that is what you do at the fest or at least what I do) we all got into a heated discussion over this film. Why it made us angry and so on. For me, the part of the story that had gotten me upset, (not the angry part) was the concept that all of us working in this business has the potential to let our fears get the better of us. We all have the potential to collapse and drop out of society. For me that was the most potent message in the film whether intentional or not. I remember looking around at all these amazing talented filmmakers. There was silence. Then agreement. It was comforting to know that I was not alone in my fears. I wish Ryan had these guys around.

Countdown to OIAf, T minus 9 days.
The second most profound film I have ever seen was also at the festival. Father and Daughter by Michael Dudok de Wit. This was I think 2000. My third and last child was born that year. I was going through a stressful time with work, having finished working in Montreal and now back in Ottawa doing too much there and not enough at home. I was already feeling fragile and mortal when this film started. By the end of it I was destroyed. It helped me to realize that the moments we experience are precious things and to never take them for granted.

Father and Daughter from treip on Vimeo.

Countdown to OIAf, T minus 8 days.
A favorite moment: The retrospective on peewee’s playhouse. Showing all the variations to the opening and then showing select episodes. Peewee would always have a word of the day and then ask you to yell out whenever he would say it. This episode was no exception. Hearing an audience full of adults as old as me or older yelling at the top of their lungs every time the word was said, was a special moment.

Countdown to OIAF T minus 7 days.
2005. The year, The District! (Nyocker!) won the grand prize and Harvey Birdman Attorney at Law won for TV series for adults.
I had been working on almost exclusively preschool shows for the past few years. Which is not a bad thing but working on long form projects for years at a time can help you lose perspective on why you are doing what you are doing. Sometimes you need a change. Seeing these two projects re-motivated me into realizing that good story should always win over process but process can help enhance good story. The District!, was innovative in combining a variety of techniques into a visually impressive film. Cut outs, Maya and some 2D. Harvey was just awesome for making fun of the ridiculously bad shows that I had either grown up watching or had the < unfortunate> opportunity to have been a part of early in my career. Both were irreverent. This was the year that I got really passionate about technology and how to change processes to make an artist’s life easier. Unexpected results.

Countdown to OIAF, T minus 6 days.
A tale of networking.
The industry can be fickle some years. Ups and downs as far as regular pay and such. One year I was flat broke after a studio I was at went under, (this was Ottawa and has happened a couple of times to me and others). Even though I was on a tight budget, I could not allow myself to miss the festival. My thoughts at the time were, I needed to keep networking to see what was out there and make sure I did not miss an opportunity, and I really needed to escape into the minds of film makers creating images that I could enjoy. I have a fairly large record collection so I decided to see if there were some that one of the local record stores would buy off me. I needed to get about $200 for the pass that year. I walked to a store that was downtown with a big stack of records. They ended up buying only 5 but that got me $250. This was, I think, 1994? The year The Wrong Trousers won. I did not have much money for anything other than the bus but had a great time watching the films and meeting some of the film makers. The night of the awards ceremony I ended up sitting next to someone that I had not seen for a few years. We had worked together at Crawley Films and then Hinton Studios, although in different departments. We got to talking about what we had been up to over the past years. He had started a small studio. by the end of the night, he had offered me a job. Not only a great festival but a lucky encounter that meant I did not have to sell any more of my records. At least not that year.

Countdown to OIAF, T minus 5 days

Getting to be interviewed on the Frenzer/Foreman animation podcast was a fun and surreal experience. They

both are veterans of animation and have done amazing work on their own. They started doing this podcast at the festival a few years back. I remember one night in their hotel, after a fun day of film watching and listening to their interviews while recording them, we were having a discussion on stop motion with humans instead of inanimate objects and how best to do a simple walk cycle. I think because we had watched Ward 13, really awesome short. We pulled out our Iphones and started using whatever app we had to try and make a believable walk cycle in as few frames as possible. The room was very small and full of festival goers. We kept getting in the way of conversations and tripping over boots and coats but ended up making a few 8 and 10 frame cycles we were pretty happy with, at the time. Looking at them the next day, not so much. Not sure if the footage still exists somewhere. I miss you guys.

Countdown to OIAF, T minus 4 days.

2009. I got to produce a pilot for the Teletoon Detour pilot program and it was shown, along with the others

in the program, at the festival. Space Knights Go. Having something I helped get done being screened there was a fantastic feeling even if it was not in competition. It was really cool to be a part of that project but even cooler to see the other shows that were in that group. Some were fantastic, some mediocre and one was an absolute insult. If you were there I hope you can figure out which were which. A quote on the film in question:
“The pacing kept me with it like watching a train wreck. I couldn’t turn away, but I wanted to.”
Or:
“In a league of offensive terribleness all its own.”
I hope I someday get to meet the people that made that one. I may not have liked it but people spent time making it so that we could see their work. More than most of us do.

(our coverage of the pilots, including a review of the one mentioned here can be found here and here.)

countdown to OIAF, T minus 3 days.
Watching Jerry Beck‘s Worst Cartoons Ever screening at one of the parties. I almost lost control of my bladder. The audience was in hysterics. There are still lines from some of those shows that I use today with a select group of “in the know” people. Those that were there that is. “What do I do what do I do!?” “Push the red button master”. The stuff of legend.

Countdown to OIAF, T minus 2 days.

One year the creators of Robot chicken were in attendance at TAC and the rest of the festival. Huge fan of their work. I bumped into the two of them on the first day out front of the Chateau Laurier. Being me, I immediately walked up to them and put out my hand. I must have looked rather odd (go figure) and my movement was a bit robotic, as I was in thrall. I remember the two of them looking at me, as I moved towards them, with some level of trepidation. They weren’t sure if I was some sort of super nerd fan or not. Which I was. During the rest of the festival I kept bumping in to the two of them and in an attempt to try and recover from the first meeting, would try and say something Whitty to recover from the first impression. This happened three times and each time I am pretty sure I made the encounter more awkward than the last. Something that I am somewhat of an expert at as I am sure some of you will realize. I am sure Chris can attest to this as I can think of a few occasions where I did or said something awkward in front of him. I am sure this year will be no less of a chance for this to happen. I look forward to it!

Published in commentary and showcase