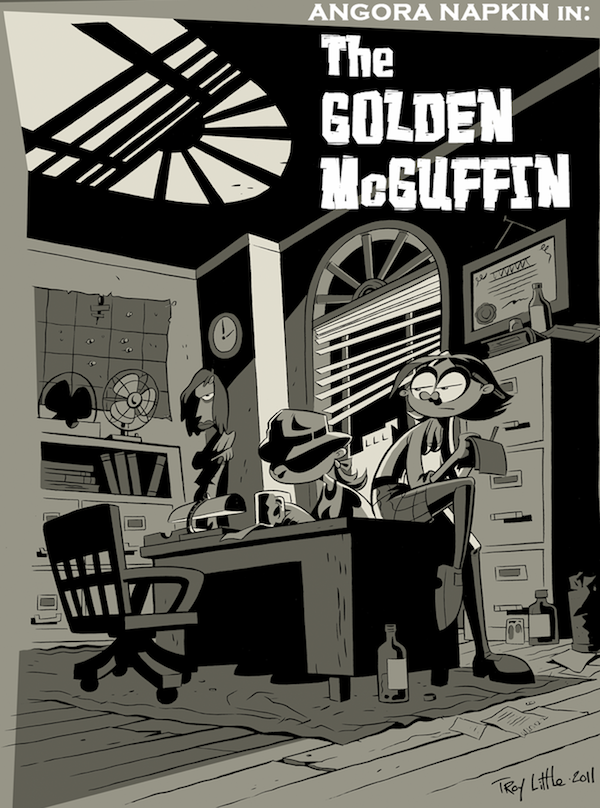 Charlottetown PE – The indie cult favorite ‘Angora Napkin’ is back in 2012 in two new adventures. Later this year IDW will be publishing the next ‘Angora Napkin’ graphic novel entitled, “Harvest of Revenge” but that wasn’t enough for creator Troy Little as he begins his first major foray into web comics with “Angora Napkin: The Golden McGuffin” beginning on July 1st.

“Web comics are a very different beast from regular comics. I  wondered if ‘Angora Napkin’ would translate well into that format.   After giving it a shot and drawing a few I found that it actually works very well as a gag strip.” says Troy.

‘Angora Napkin’ is a pop music trio consisting of three girls who have a surreal up-beat attitude about everything yet tend to find them selves wrapped up & over their heads in macabre situations. The new series opens with a failed circus strongman bursting into  Angora  Napkin’s existential detective agency announcing his imminent murder  and revealing a terrible secret that could destroy the world.

“Much in the vein of Segar’s ‘Popeye’ this new storyline will be an adventure-comedy serial. I’m trying to get the best from a long form comic story but in bite size installments that I feel work better for online serialization. It’ll be a fun ride and a good build up to  the next book coming out from IDW this winter.”
“In lieu of having a budget proper for promoting this new web comic I’ve decided to co-opt July 1st (Canada Day) as a Nation wide launch  party! There will be fireworks, face painting and cookouts all across this great Nation celebrating the start of my web comic –  it’s all very exciting!”

Even if you’re not in Canada to join in the party, you can still read the first installment online beginning July 1st, eh?

Troy Little is the writer/artist and co-creator behind the Eisner nominated ‘Angora Napkin’ series as well as a Xeric / PEICA recipient for his for graphic novel, ‘Chiaroscuro’, both published  by IDW Publishing.